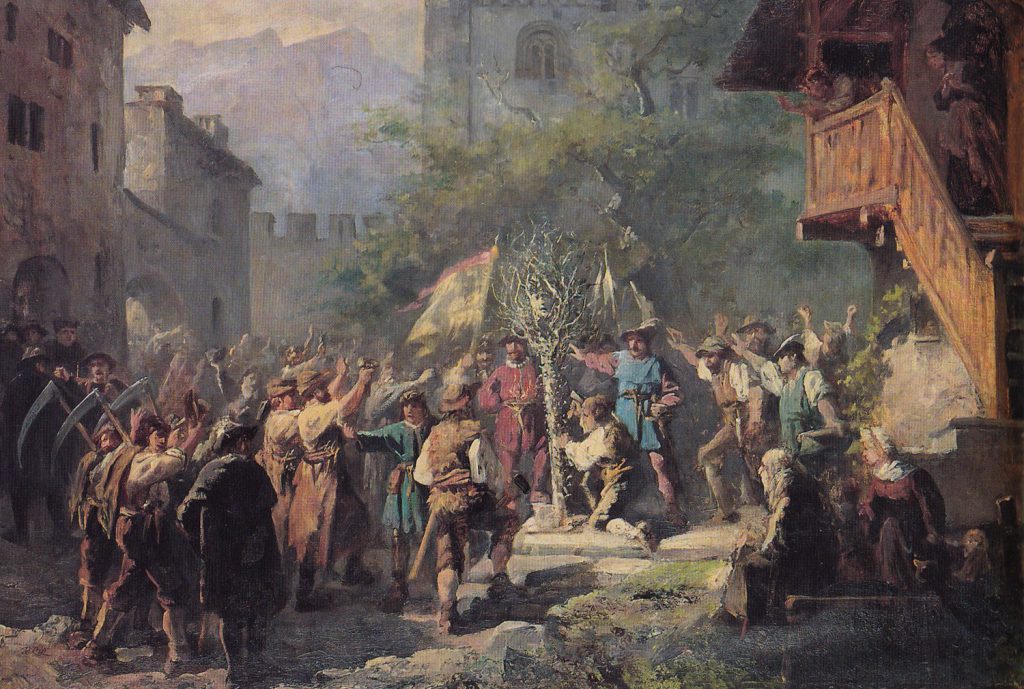 A true ancestor of the popular petition, the matze is a tree trunk that was torn down and dragged from village to village in the Upper Valais (Switzerland) from the end of the 15th century, in order to mobilize the local populace around a common cause. If they were in agreement, the locals then planted a nail in the trunk as a sign of solidarity with the cause.

Matza is the umbrella name for a series of artistic projects that focus on land as a place for collective affirmation and political emancipation. It is inspired by the mazze, an instrument derived from a popular tradition of the Haut-Valais, a real tool of direct democracy at the service of the local community. Taking the form of a tree trunk with a human head, from the fifteenth century on the mazze was raised by the local inhabitants as a sign of their defiance. It was first brandished in 1494 by the local population against the episcopal power of Sion. The mazze was then raised up against the designated tyrant and exposed in a public square. The inhabitants, called upon to come together and rebel, planted a nail in it as a sign of their sign of their solidarity.

In addition to its political role in the history of Upper Valais, the mazze holds a strong symbolism inextricably bound to the identity of the Valaisan population. It is the symbol of a community’s determination to defend itself and take its destiny into its own hands. The social, economic and political history of the Valais is made up of just such unusual elements and inventive processes as these, that each highlight the vitality of a community, its deep ties of solidarity and its attachment to the land and its resources.

Matza’s aim is to take the Valais experience, with all its strengths and weaknesses, and place it in a contemporary context faced with the challenges of our modern societies. Global mechanisms, freed from geographical restraints, have upset our familiar physical and political markers. They have profoundly altered the relationship of citizens to their territory, their land and their culture, some of whom now feel that they have lost their grip on them. In a shifting world, the usual references become blurred, leaving people disoriented and confused. Space, as a shared resource, becomes in such conditions the object of tension and a crisis of identity. Matza turns this on its head to reimagine the world as a place for emancipation and affirmation.

Through these tales of a rudimentary, but resolute, tradition, we see the capacity of a populace to determine its own social and spatial organisation, as well as its generosity and adaptability. The mazze thus becomes the symbol of a type of creative self-determination and of a willingness to face up to the challenges of our society.

Matza has neither a pre-determined form nor any particular geographical attachment. It is a manifesto, a link between art, the individual and his environment, that serves to reveal the potential of each. With its roots in the story of a community, its traditions and its rituals, Matza sketches the outline a new political architecture…